Antrea is designed to be Kubernetes-centric and Kubernetes-native. It focuses on and is optimized for networking and security of a Kubernetes cluster. Its implementation leverages Kubernetes and Kubernetes native solutions as much as possible.

Some information in this document and in particular when it comes to the Antrea Agent is specific to running Antrea on Linux Nodes. For information about how Antrea is run on Windows Nodes, please refer to the Windows design document.

In a Kubernetes cluster, Antrea creates a Deployment that runs Antrea Controller, and a DaemonSet that includes two containers to run Antrea Agent and OVS daemons respectively, on every Node. The DaemonSet also includes an init container that installs the CNI plugin - antrea-cni - on the Node and ensures that the OVS kernel module is loaded and it is chained with the portmap and bandwidth CNI plugins. All Antrea Controller, Agent, OVS daemons, and antrea-cni bits are included in a single Docker image. Antrea also has a command-line tool called antctl, and an Octant UI plugin. 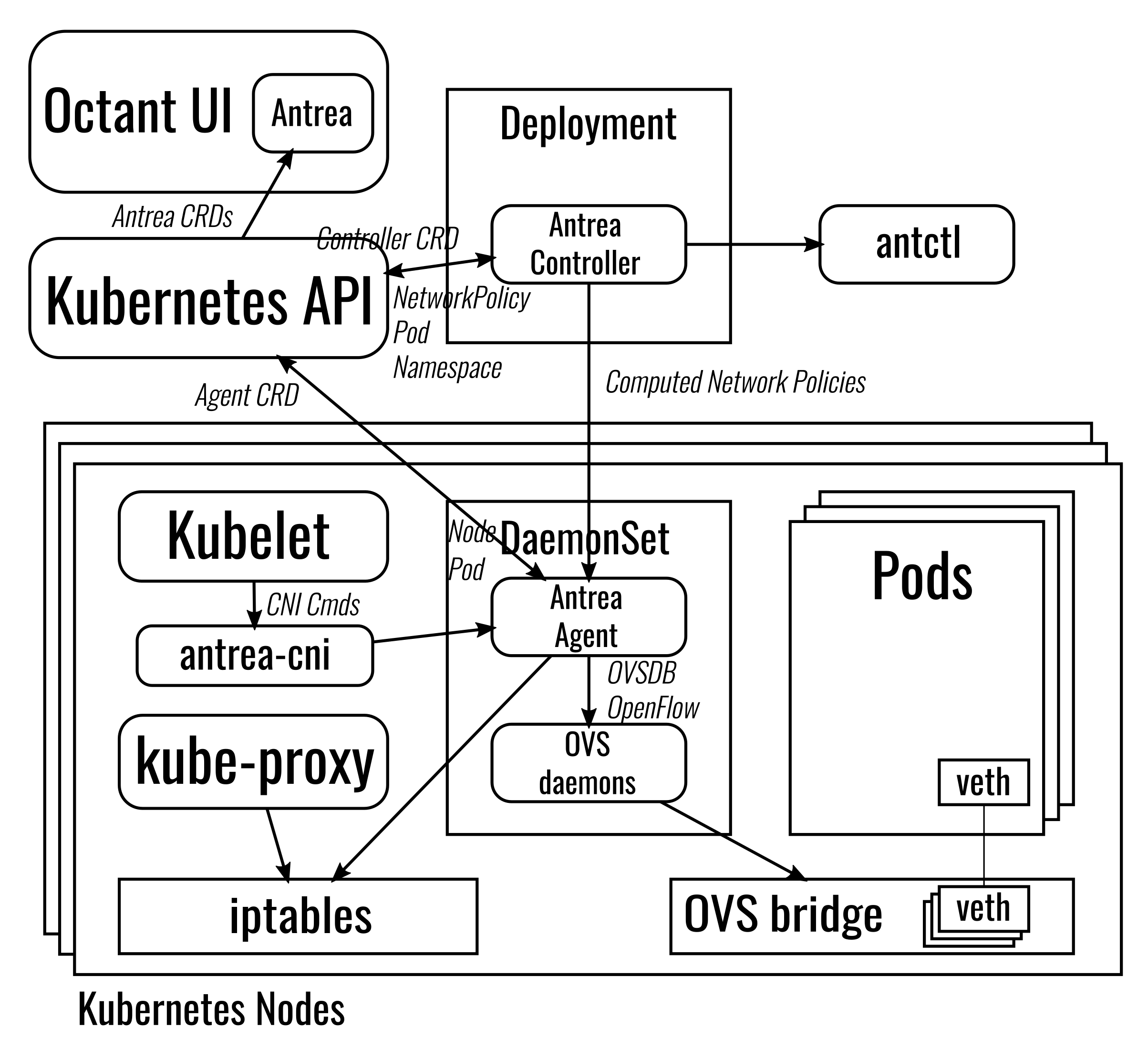 Antrea Controller leverages the Kubernetes apiserver library to implement its own API server. The API server implementation is customized and optimized for publishing the computed NetworkPolicies to Agents:

Antrea Agent manages the OVS bridge and Pod interfaces and implements Pod networking with OVS on every Kubernetes Node.

Antrea Agent exposes a gRPC service (Cni service) which is invoked by the antrea-cni binary to perform CNI operations. For each new Pod to be created on the Node, after getting the CNI ADD call from antrea-cni, the Agent creates the Pod’s network interface, allocates an IP address, connects the interface to the OVS bridge and installs the necessary flows in OVS. To learn more about the OVS flows check out the OVS pipeline doc.

The two OVS daemons - ovsdb-server and ovs-vswitchd run in a separate container, called antrea-ovs, of the Antrea Agent DaemonSet.

antctl is a command-line tool for Antrea. At the moment, it can show basic runtime information for both Antrea Controller and Antrea Agent, for debugging purposes.

When accessing the Agent, antctl connects to the Agent’s local REST endpoint, and can only be executed locally in the Agent’s container.

On every Node, Antrea Agent creates an OVS bridge (named br-int by default), and creates a veth pair for each Pod, with one end being in the Pod’s network namespace and the other connected to the OVS bridge. On the OVS bridge, Antrea Agent also creates an internal port - antrea-gw0 by default - to be the gateway of the Node’s subnet, and a tunnel port antrea-tun0 which is for creating overlay tunnels to other Nodes.

Each Node is assigned a single subnet, and all Pods on the Node get an IP from the subnet. Antrea leverages Kubernetes' NodeIPAMController for the Node subnet allocation, which sets the podCIDR field of the Kubernetes Node spec to the allocated subnet. Antrea Agent retrieves the subnets of Nodes from the podCIDR field. It reserves the first IP of the local Node’s subnet to be the gateway IP and assigns it to the antrea-gw0 port, and invokes the host-local IPAM plugin to allocate IPs from the subnet to all local Pods. A local Pod is assigned an IP when the CNI ADD command is received for that Pod.

For every remote Node, Antrea Agent adds an OVS flow to send the traffic to that Node through the appropriate tunnel. The flow matches the packets' destination IP against each Node’s subnet. 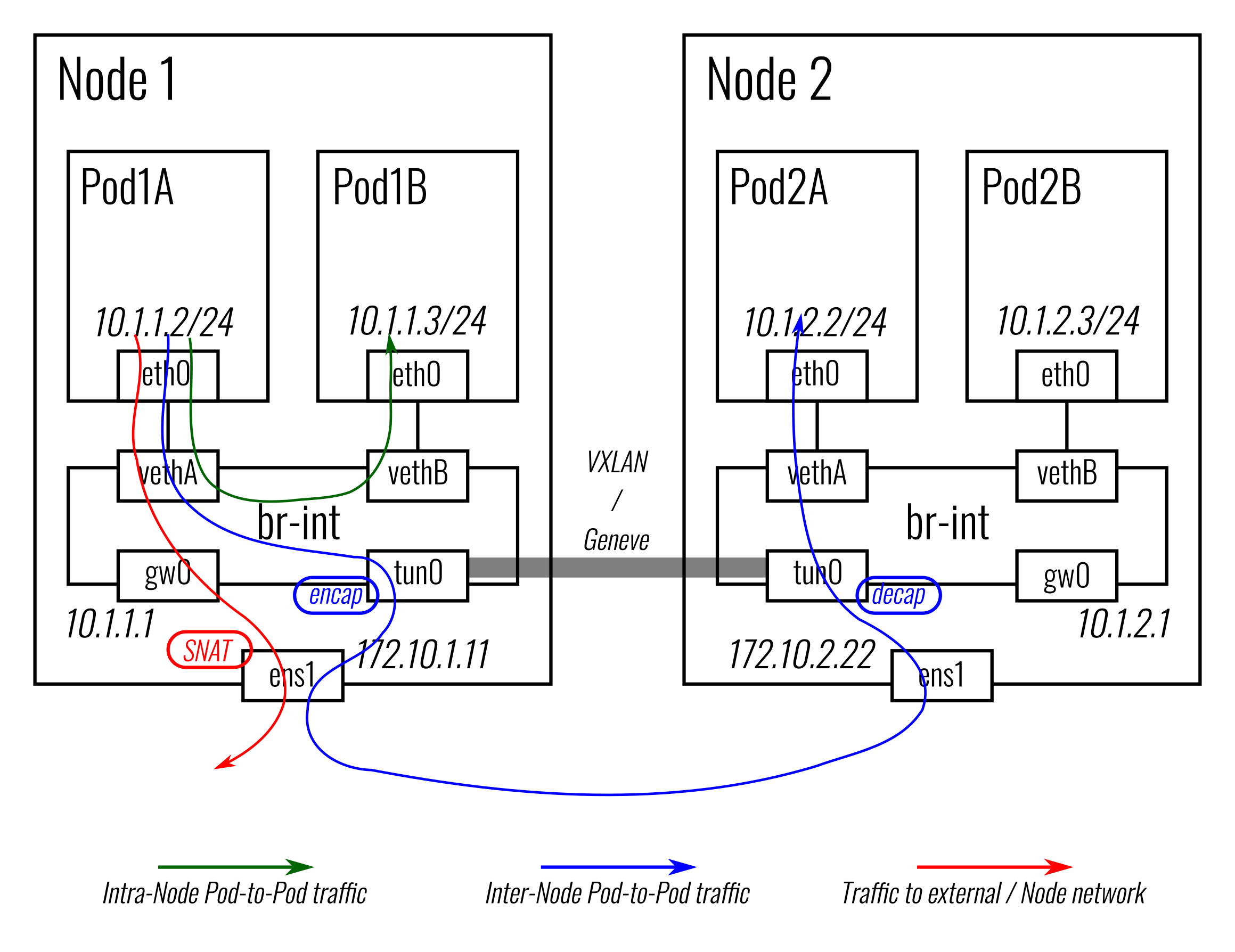 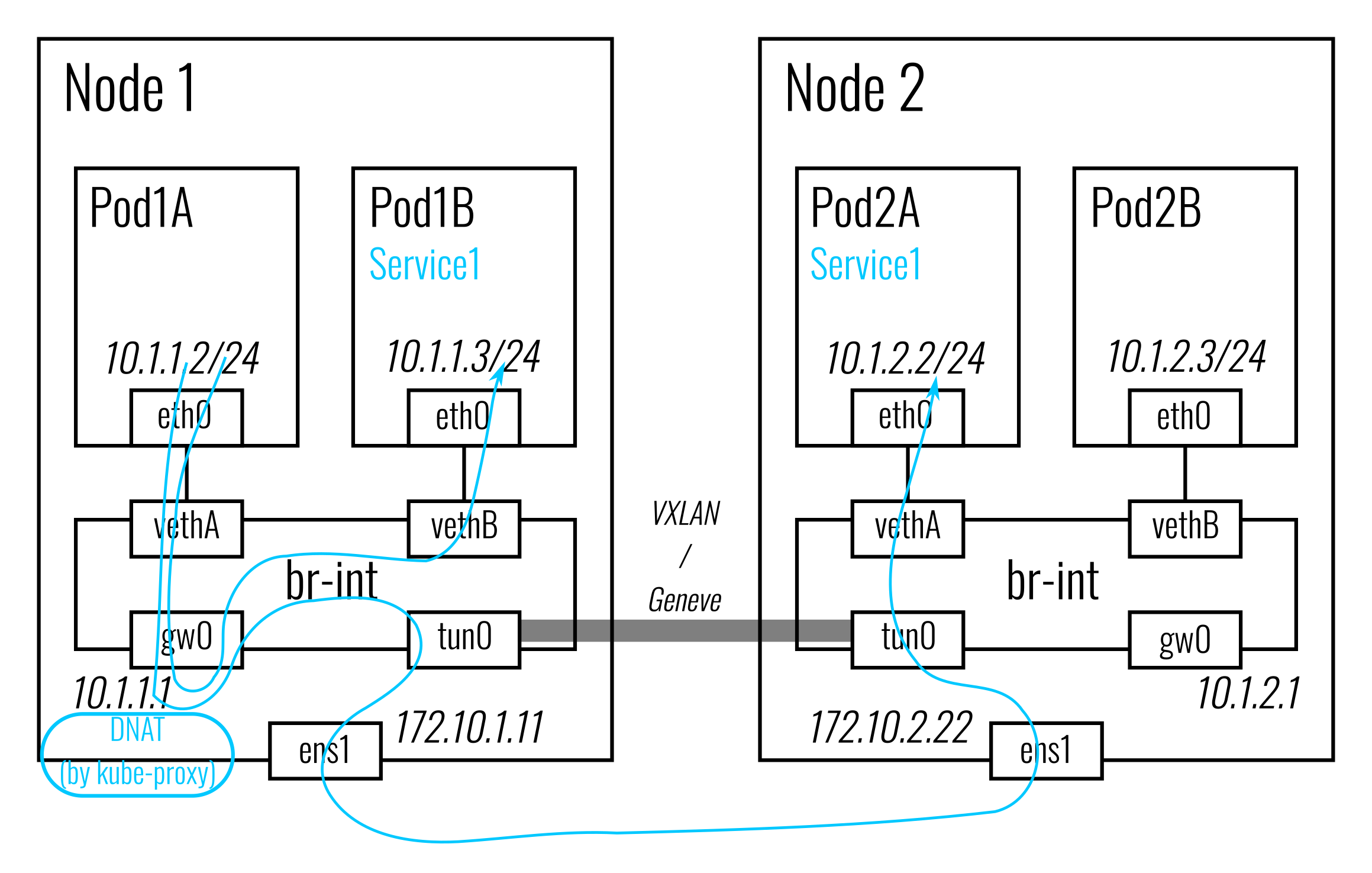 kube-proxy can be used in any supported mode: user-space iptables, or IPVS. See the Kubernetes Service documentation for more details.

When AntreaProxy is enabled, Antrea Agent will add OVS flows that implement load balancing and DNAT for the ClusterIP Service traffic. In this way, Service traffic load balancing is done inside OVS together with the rest of the forwarding, and it can achieve better performance than using kube-proxy, as there is no extra overhead of forwarding Service traffic to the host’s network stack and iptables processing. The AntreaProxy implementation in Antrea Agent leverages some kube-proxy packages to watch and process Service Endpoints.

Antrea Controller also computes which Nodes need to receive a NetworkPolicy. Each Antrea Agent receives only the computed policies which affect Pods running locally on its Node, and directly uses the IP addresses computed by the Controller to create OVS flows enforcing the specified NetworkPolicies.

We see the following major benefits of the centralized computation approach:

As described earlier, Antrea Controller leverages the Kubernetes apiserver library to build the API and communication channel to Agents.

Hybrid mode requires the Node network to allow packets with Pod IPs to be sent out from the Nodes' NICs.

To enable IPsec, an extra container -antrea-ovs-ipsec - must be added to the Antrea Agent DaemonSet, which runs the ovs-monitor-ipsec and strongSwan daemons. Antrea now supports only using pre-shared key (PSK) for IKE authentication, and the PSK string must be passed to Antrea Agent using an environment variable - ANTREA_IPSEC_PSK. The PSK string can be specified in the Antrea IPsec deployment yaml, which creates a Kubernetes Secret to save the PSK value and populates it to the ANTREA_IPSEC_PSK environment variable of the Antrea Agent container.

On a Windows Node, Antrea acts very much like it does on a Linux Node. Antrea Agent and OVS are still run on the Node, Windows Pods are still connected to the OVS bridge, and Pod networking is still mostly implemented with OVS flows. Even the OVS flows are mostly the same as those on a Linux Node. The main differences in the Antrea implementation for Window Node are: how Antrea Agent and OVS daemons are run and managed, how the OVS bridge is configured and Pod network interfaces are connected to the bridge, and how host network routing and SNAT are implemented. For more information about the Antrea Windows implementation, refer to the Windows design document.